As a refresh for those whose world does not revolve around VMware, vSphere and software defined data centers (believe it or not there are some who exist ;), ESXi is the hypervisor that virtualizes underlying physical machines (PM’s) known as hosts. 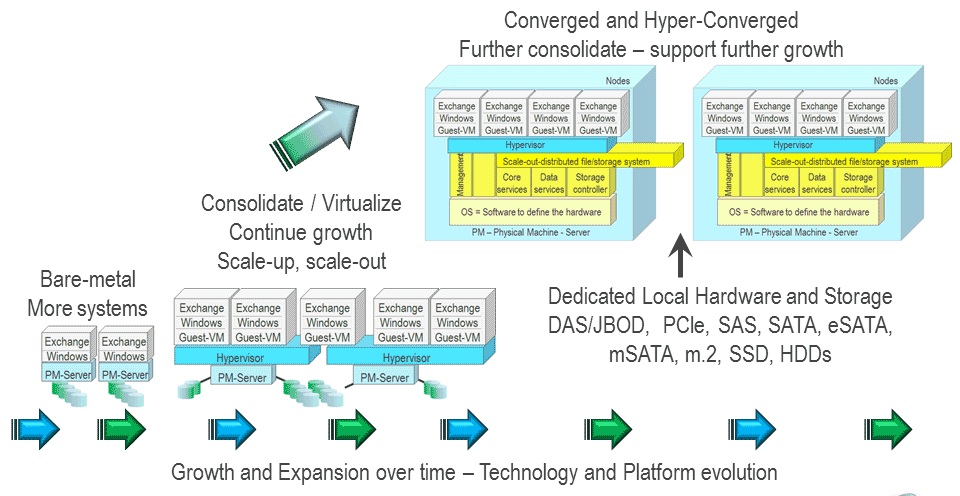 VMware vSphere is flexible and can adapt to different sized environments from small office home office (SOHO) or small SMB, to large SMB, SME, enterprise or cloud service provider. There is a free version of ESXi along with paid versions that include support and added management tool features. Besides the ESXi vSphere hypervisor, other commonly deployed modules include the vCenter administration along with Infrastructure Controller services platform among others. In addition, there are optional solution bundles to add support for virtual networking, cloud (public and private), data protection (backup/restore, replication, HA, BC, DR), big data among other capabilities.

What is new with vSphere V6

VMware has streamlined the installation, configuration and deployment of vSphere along with associated tools which for smaller environments makes things simply easier. For the larger environments, having to do less means being able to do more in the same amount of time which results in cost savings. In addition to easier to use, deploy and configure, VMware has extended the scaling capabilities of vSphere in terms of scaling-out (larger clusters), scaling-up (more and larger servers), as well as scaling-down (smaller environments and ease of use). 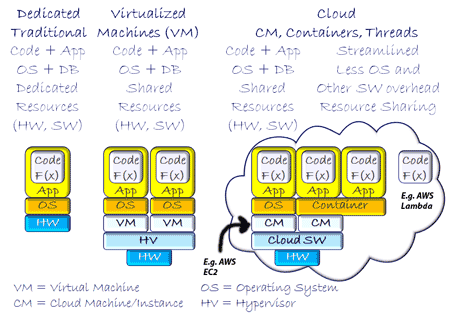 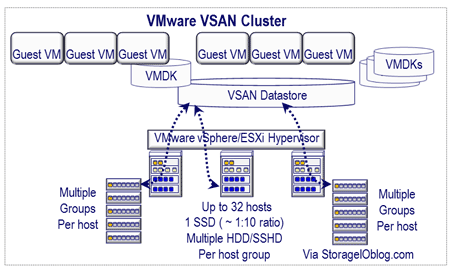 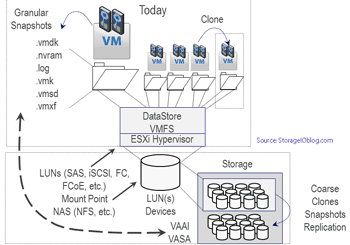 vVOL’s are not LUN’s like regular block (e.g. DAS or SAN) storage that use SAS, iSCSI, FC, FCoE, IBA/SRP, nor are they NAS volumes like NFS mount points. Likewise vVOL’s are not accessed using any of the various object storage access methods mentioned above (e.g. AWS S3, Rest, CDMI, etc) instead they are an application specific implementation. For some of you this approach of an applications specific or unique storage access method may be new, perhaps revolutionary, otoh, some of you might be having a Deja Vu moment right about now.

Keep in mind that what makes up a VMware virtual machine are the VMK, VMDK and some other files (shown in the figure below), and if enough information is known about where those blocks of data are or can be found, they can be worked upon. Also keep in mind that at least near-term, block is the lowest common denominator that all file systems and object repositories get built-up. 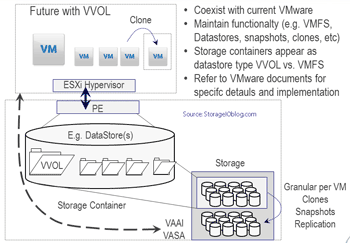 Here is the thing, while vVOL’s will be accessible via a block interface such as iSCSI, FC or FCoE or for that matter, over Ethernet based IP using NFS. Think of these storage interfaces and access mechanisms as the general transport for how vSphere ESXi will communicate with the storage system (e.g. their data path) under vCenter management.

Keep in mind that the storage system will still function as it normally would, just think of vVOL as another or new personality and access mechanism used for VMware to communicate and manage storage. Watch for vVOL storage provider support from the who’s who of existing and startup storage system providers including Cisco, Dell, EMC, Fujitsu, HDS, HP, IBM, NetApp, Nimble and many others. Read more about Storage I/O fundamentals here and vVOLs here and here.

What this announcement means

Depending on your experiences, you might use revolutionary to describe some of the VMware vSphere V6 features and functionalities. Otoh, if you have some Deja vu moments looking pragmatically at what VMware is delivering with V6 of vSphere executing on their vision, evolutionary might be more applicable. I will leave it up to you do decide if you are having a Deja vu moment and what that might pertain to, or if this is all new and revolutionary, or something more along the lines of technolutionary.

VMware continues to execute delivering on the Virtual Data Center aka Software Defined Data Center paradigm by increasing functionality, as well as enhancing existing capabilities with performance along with resiliency improvements. These abilities enable the aggregation of compute, storage, networking, management and policies for enabling a global virtual data center while supporting existing along with new emerging applications.

Where to learn more

If you were not part of the beta to gain early hands-on experience with VMware vSphere V6 and associated technologies, download a copy to check it out as part of making your upgrade or migration plans.

Check out the various VMware resources including communities links here
VMware vSphere Hypervisor getting started and general vSphere information (including download)
VMware vSphere data sheet, compatibility guide along with speeds and feeds (size and other limits)

Wrap up and summary

Overall VMware vSphere V6 has a great set of features that support both ease of management for small environments as well as the scaling needs of larger organizations.

**Disclosure: I am a real user, and this review is based on my own experience and opinions.
Last updated: Dec 25 2015
More VMware vSphere reviews from users
...who work at a Financial Services Firm
...at Large Enterprises
...who compared it with Nutanix AHV

Free Report: VMware vSphere Reviews and More
Learn what your peers think about VMware vSphere. Get advice and tips from experienced pros sharing their opinions. Updated: December 2020.
Download now
455,962 professionals have used our research since 2012.
Add a Comment